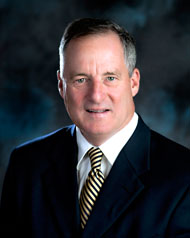 After earning his bachelor’s degree in political science from the University of California, Santa Barbara, Mr. Flynn worked as an intern for an arms control and national security issues interest group in Washington D.C. Later, he worked for the Congressional Research Service of the Library of Congress.

Continuing his education at the Friedrich Wilhelms University in Bonn, West Germany, Mr. Flynn obtained an M.A. in International Affairs after receiving a Rotary International Graduate Fellowship to study. He then worked briefly in the title insurance industry before earning a secondary teaching credential in social science from San Francisco State University.

For 25 years, Mr. Flynn taught German and Social Science in the Oxnard Union High School District and Political Science at Oxnard College, before retiring from teaching in 2018.