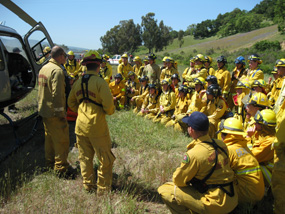 The first academy class graduated in July 1995 with 17 fire explorers being appointed to ride-a-long status. Each fire explorer is given a station assignment.

A committee of sworn fire department personnel runs the Explorer Post. The chain of command is as follows:

The Fire Explorer Chief, and Shift Captains are considered E Board Members. These individuals make decisions and plan activities for the rest of the post.

Under direct supervision, a fire explorer participates in a basic fire training curriculum, assists firefighters with various support activities during emergencies, and provides direct assistance during fire prevention and public education activities. After completion of the Oxnard Fire Explorer Basic Academy explorers will do the following:

Requirements to Apply (During Recruitment in June)

Each year, Post 9244 is invited to the California State Fire Exploring Academy. It is hosted by different fire departments throughout the state, and sponsored by the California Fire Exploring Association. Each post applying to the academy is allotted only 5 spots each year, with the size of the academy around 160. Previous academies have seen a number of posts throughout the state of California as well as Nevada, and even Alaska!

The academy is one week long and covers multiple fire service topics including fire Control 3 (Structural), Fire Control 4 (Oil/Flammable Liquids), Fire Control 6 (Wildland Fires), and Auto Extrication. Traditionally, the academy starts the day after Easter and runs for 7 days. It concludes with a formal graduation and awards ceremony.

– The orientation/meeting will be held at Station 1 (491 South K Street – on the corner of Fifth and K Street, behind the Vons Shopping Center). Anyone interested in joining the post needs to show up at the station by 1830 hrs. (6:30 pm).  Information, including applications, will be handed out during the orientation. There will be physical agility events set up for practice so be sure to bring active clothes/footwear if needed. For those interested in attending the orientation, please do not park inside the fire station. There is adequate street parking, as well as two parking lots available.

– All new explorers are to report to Station 1 (491 South K Street – on the corner of Fifth and K Street, behind the Vons Shopping Center) by 0900 hrs (9:00am)! You will be doing some running, so please wear the appropriate clothing (shirt, shorts or sweat pants, running shoes). You should also bring along some water to drink during breaks. Applications will be accepted this day ONLY! All existing explorers are to report to the station at 0800 hrs. for setup and assignments.

– This is only for those that have gone through the testing process and have been formally accepted. This year, the academy is 2 consecutive weekdays (Mon. – Fri.), with a graduation ceremony on August 1st. Week one begins 7/20 and week two begins 7/27; training will be conducted at Station 1.