OXNARD, California – Standard and Poor’s Global Ratings raised the credit rating of the City of Oxnard’s Wastewater Revenue Bonds from “BBB to A-,” a two-notch, 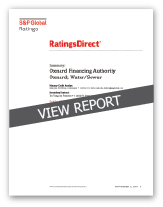 positive increase in the City’s creditworthiness. The City’s Wastewater Fund outlook was affirmed as “stable.”

Mayor Tim Flynn said, “This is a proud moment for the City and excellent news for our community reflecting two years of hard work and discipline. Adjusting rates was necessary to get the [City’s] wastewater fund back into good shape. Our work has paid-off. The new bond rating will lower the City’s borrowing costs and make it less expensive to finance the much needed improvements of the system.”

The Standard and Poor’s bond rating increase highlights the steps taken by the City to stabilize the finances of the wastewater fund, especially the City Council’s approval of a five-year, wastewater rate rate package of 5.25 percent per year. The new ratings reports stresses S&P’s expectation “that the City will continue to implement the rate increases as approved, and begin another rate-setting process in fiscal year 2021 to set rates thereafter — in particular to address the system’s deferred capital needs.”

S&P Global ratings anticipates that the City’s financial performance going forward will likely remain strong in the near term.