On December 28, 2020 the Ventura County Superior Court issued a tentative ruling on the lawsuit Mr. Aaron Starr filed against the City of Oxnard in 2017. Mr. Starr claims that the City had “illegally” charged the City’s three utilities an infrastructure use fee, or IUF, during the period of 2014 to 2017. Starr claims the City had been “skimming” the funds, and asked the Court to do away with the IUF altogether.

The Court’s ruling, available here, explains that the City’s action was not illegal but rather the City implemented the IUF wrongly and improperly, therefore the City must return the $34.5M IUF funds to the utilities. The ruling makes it clear that the City can in fact implement the IUF if done so correctly.

This ruling is easy to understand. In it the Court also found against Mr. Starr on his specific claims that the IUF is unconstitutional under the California Vehicle Code, and that the Court should rescind a duly enacted municipal ordinance allowing for the IUF. Again, the Court ruled that the IUF is legal, but that Oxnard implemented it incorrectly.

I hope our community understands that Mr. Starr does not have our best interests at heart in his various actions. In this case, rather than correcting how the IUF was implemented, which I agree with, he sought to throw the baby out with the bath water, to meet his political objectives to the detriment of our community. This action will also result in halting the payments the utilities currently contribute to the streets maintenance fund, further hampering our ability to keep up with road maintenance throughout the City. Yet Mr. Starr recently convinced voters to pass his Measure N which promises to provide better streets but in the fine print it actually risks losing all of Measure O funding for Police, Fire, recreation and senior services, and streets!

And remember that in Mr. Starr’s lawsuit over the prior Measure M where he attempted to dictate the City’s sewer safety standards, the Court stated that he went against “common decency”.

This City has much to recover from and improve, and we have been making very good, steady progress. I believe we are on a good path to making Oxnard a better place for all. I welcome critique and ideas for improvement at City Hall. But I am very skeptical of people like Mr. Starr who purport to help the community while actually undermining the City’s ability to provide the programs and services that Oxnard residents and businesses need and deserve. This City has indeed made mistakes. Mr. Starr takes advantage of them, not to make things better, but to achieve his political ideology to shrink government and end taxes, regardless of how it impacts our community. While I agree with some of Mr. Starr’s criticisms, I simply do not trust his motives.

“This validates the fact that Oxnard is being a responsible steward of taxpayer dollars and that the days of financial mismanagement are behind us,” said City Manager Alex Nguyen.

Over the past five years, the City’s annual audits identified a total of 158 different findings concerning its internal controls over financial reporting and accounting policies and procedures. Of these 158 findings, 65 were material weaknesses, which represents the most serious type of finding.

Last year, the City received its first audit since 2014 with no new material weakness findings. Based on feedback received this month from the City’s independent external auditors, Eadie+Payne, the City has fully remediated all but one material weakness, and the City expects that one to be resolved by the end of this year. Overall, staff has cleared more than 90 percent of all the audit findings.

This is a turning point for the organization as it has now corrected well over 100 audit findings from prior years. In 2018, the City was required to produce a Corrective Action Plan (CAP) and submit it to the State Controller’s Office for review and approval. In January of 2019, Chief Financial Officer Kevin Riper and Assistant Chief Financial Officer Donna Ventura joined the organization and continued work on fixing all of the past deficiencies.

The new leadership team transformed the Finance Department to address the audit findings and improve staff technical competencies through greater investment in training. The comprehensive Internal Control-Integrated Framework recently adopted by the City Council will continue to strengthen internal processes and oversight of the City’s finances. Last year the City received a “Letter of Encouragement” from its external auditor, which reaffirmed the City’s significant progress in resolving prior financial issues in such a short period.

Staff provides the City Council with an update on the CAP every six months. The latest report will go to the City Council on Nov. 17, 2020. To view the in-depth topic discussion by the City’s Finance and Governance Committee on Oct. 27, visit https://youtu.be/gFc7Lo7Qnvk. 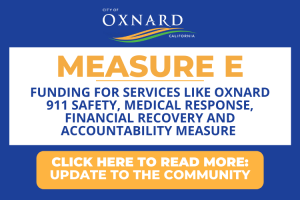 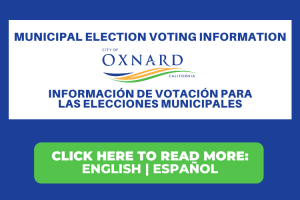 On July 7th, the Oxnard City Council unanimously placed Measure E – the City of Oxnard Local Emergency Preparedness, Recovery and Accountability Measure — on the November ballot for voter consideration.  If enacted, Measure E would impose a locally controlled 1.5 cent sales tax that will provide funding to help support our community through the recovery.

If approved, Measure E could also be used for recovery and relief, and community- identified priorities including:

Measure E requires all funds to be used in Oxnard and also requires independent annual audits and public disclosure of all spending to ensure funds are spent properly. By law, no funds can be taken by the state, county or federal government.

The Measure would be general sales tax paid for by residents, visitors, and workers in the City of Oxnard. All proceeds from the tax would go to the City’s General Fund and would be available for any municipal purpose. To be adopted, Measure E must be approved by a simple majority of the ballots cast in this election.

The Oxnard City Manager provided an Informational Presentation on Tues., Sept. 22 at 6 p.m. regarding Measure E during a Special City Council meeting.

Oxnard voters will also have the opportunity to select the City’s Mayor, City Councilmembers for Districts 3, 4, and 6, the City Treasurer and City Clerk this November.

For more information on Oxnard’s upcoming Municipal Election, visit the links below.

We want your input on proposed smoking ordinance

The Oxnard City Council will review a proposed smoking ordinance during its regularly scheduled meeting on Tuesday, Sept. 6, 2016.

Businesses and residents are encouraged to attend the meeting to provide their input. This will be the City Council’s first reading of the proposed ordinance.

Under the proposed ordinance, smoking (including vaping) would be prohibited in/at:

The Council agenda will be posted to the City’s website at www.oxnard.org/city-council-meetings by the end of the day on Thursday, Sept. 1, 2016.